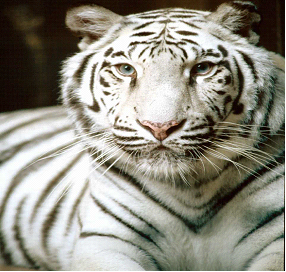 There is a wildlife park not far from my home which houses many rare and exotic animals including White Bengal Tigers. These beauties are  8-10 feet long and weigh nearly 500 pounds. Can you imagine how intimidating, if not downright terrifying, they would be when glaring at you from a standing position?

A friend of mine recently took his family on an outing to this park and they stopped to see the tigers. He hadn’t before realized how mammoth those tigers are. His family was right next to the tiger’s enclosure, he explained, when one of those mammoth cats reared up on its back legs and looked down on them from  a fully vertical position. “He was bigger than a grizzly bear!” my friend exclaimed. This man, who is more than six-foot tall, motioned with his hands above his own head, explaining, “My head went to about here on the tiger, and that wasn’t even up to his shoulders!”

As we talked for a few moments about those beautiful Bengals, he related something very noteworthy that I would like to share with you.

While most of his family stood frozen, staring at the upright tiger, one of the children, an adorable, bright-eyed five year-year-old, squealed with excitement. “Daddy! Did you see that?”   See it? I was a bit frightened by it,  her father thought. Naturally, the man assumed his daughter had been mesmerized by the monstrous tiger, but what exactly had caught her attention? Was it the tiger’s large sharp teeth, its towering height, which to her must have seemed like a mountain, or perhaps something else?

“The ladybug, Daddy, look at the ladybug!”

Children sometimes say the most thought-provoking things without even trying, and that was one of those times. My friend  immediately took note of the lesson to be learned in his daughter’s simple words.

“It’s all in one’s perspective,” he said. “There I was focusing on this enormous thing before me, and how dangerous it could be, and my daughter didn’t even give it a second thought because her attention was excitedly fixed on a pretty little ladybug.”  Life can be like that. We all face our own giants in this life, but our attitude is  always determined by that which we are focused on. The choice is ours. Will we choose to focus on the problems which loom large in front of us, or will we focus on the Lord and His many blessings?

Let all that I am praise the LORD; may I never forget the good things he does for me. He forgives all my sins and heals all my diseases. He redeems me from death and crowns me with love and tender mercies. He fills my life with good things. My youth is renewed like the eagle’s!        Psalm 103 2-5