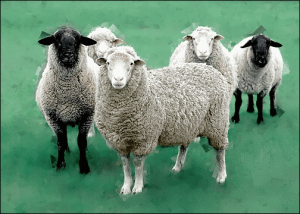 This morning I awoke to the cheerful sound of a puppy barking. Pleasant as this was, I don’t have a puppy. I do, however, have a vivacious cockatiel that loves to entertain. Boaz has a whole repertoire of songs he likes to whistle, and sounds he likes to mimic.

Admittedly, there have been times that I have mistaken some of Boaz’s sounds for others, especially his imitation of the oven timer, which he has skillfully mastered. However, being bamboozled by a feathery friend is a far cry different than being deceived by an enemy. I would like to say that has never happened to me, but sadly, it has happened far too often.

This afternoon, I was reflecting on the ease by which a person can be deceived, when the following scripture came to mind:

And when he [Jesus] putteth forth his own sheep, he goeth before them, and the sheep follow him: for they know his voice.   And a stranger will they not follow, but will flee from him: for they know not the voice of strangers (John 10:4,5).

The truth is, dear reader, that today’s culture tends to bombard each of us with all kinds of “voices” –voices which beckon us to turn this way or that; to do something, buy something, accept something. While most demand simple life decisions, all too many of those “voices” serve only to distract, or confuse us in our faith, if we aren’t careful. Sadly, in our present culture, what used to be black and white has slowly turned into varying shades of gray, and that which used to be absolute has become ambiguous, even in the church.

So how do we know where to draw the line? How can we, as Christians, be “culturally relevant” without weakening the foundations of our faith? It’s quite simple, really. As one of Christ’s sheep, we will know His voice. And if we purpose to listen to His voice daily, we won’t be duped into following another, nor will we be easily deceived by the adversary of our souls. I don’t know about you, but this brings me great comfort!